This project was conducted when I intern at JD.com, one of the online retailer giants in China. When we launched this project, the AI Lab of JD.com has just been found, and the whole department is lack of employees, especially designers. Because of this situation, I got the chance to be the design lead in this project, I cooperated with other designers and programmers to finalize the final product.

The goal of the project is mainly about creating an effortless and delightful AI interview experience for students by using a limited Natural Language Processing (NLP) technology which is still under development.

Using natural language processing technology, I designed an online interviewer for interview practice and an AI robot for campus recruitment. In an effort to make the tense interview process more relaxing, I designed a humorous and non-threatening personality for the HR Robot which give the interviewees a delightful experience during the conversation flow and a pressure-free feeling when they first encounter the AI HR Robot.

Considering the fact that the current AI technology is still primitive which can only realize limited semantic recognition, combined with insights from the survey, we decided to design an online HR interviewer and an HR robot. 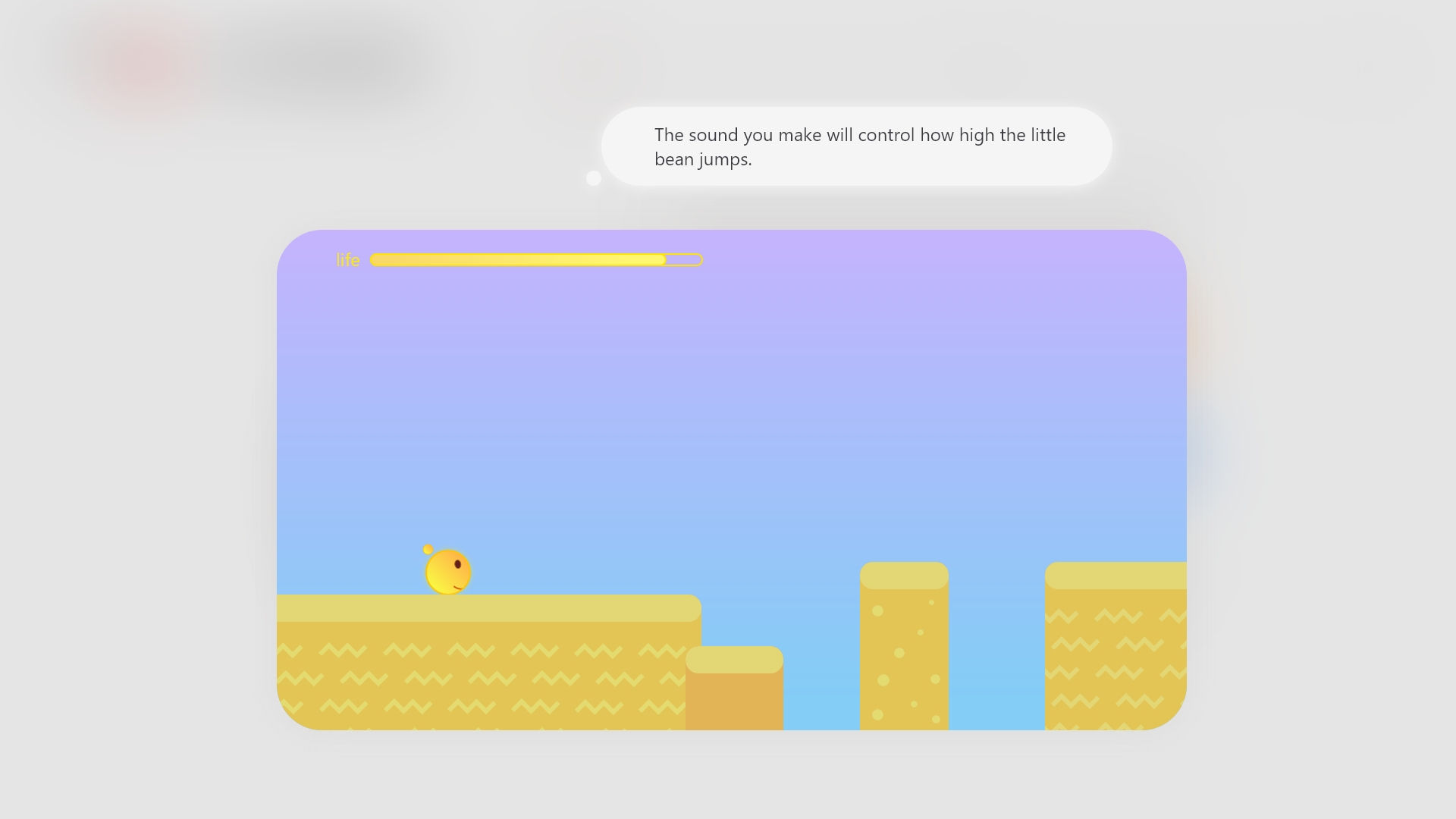 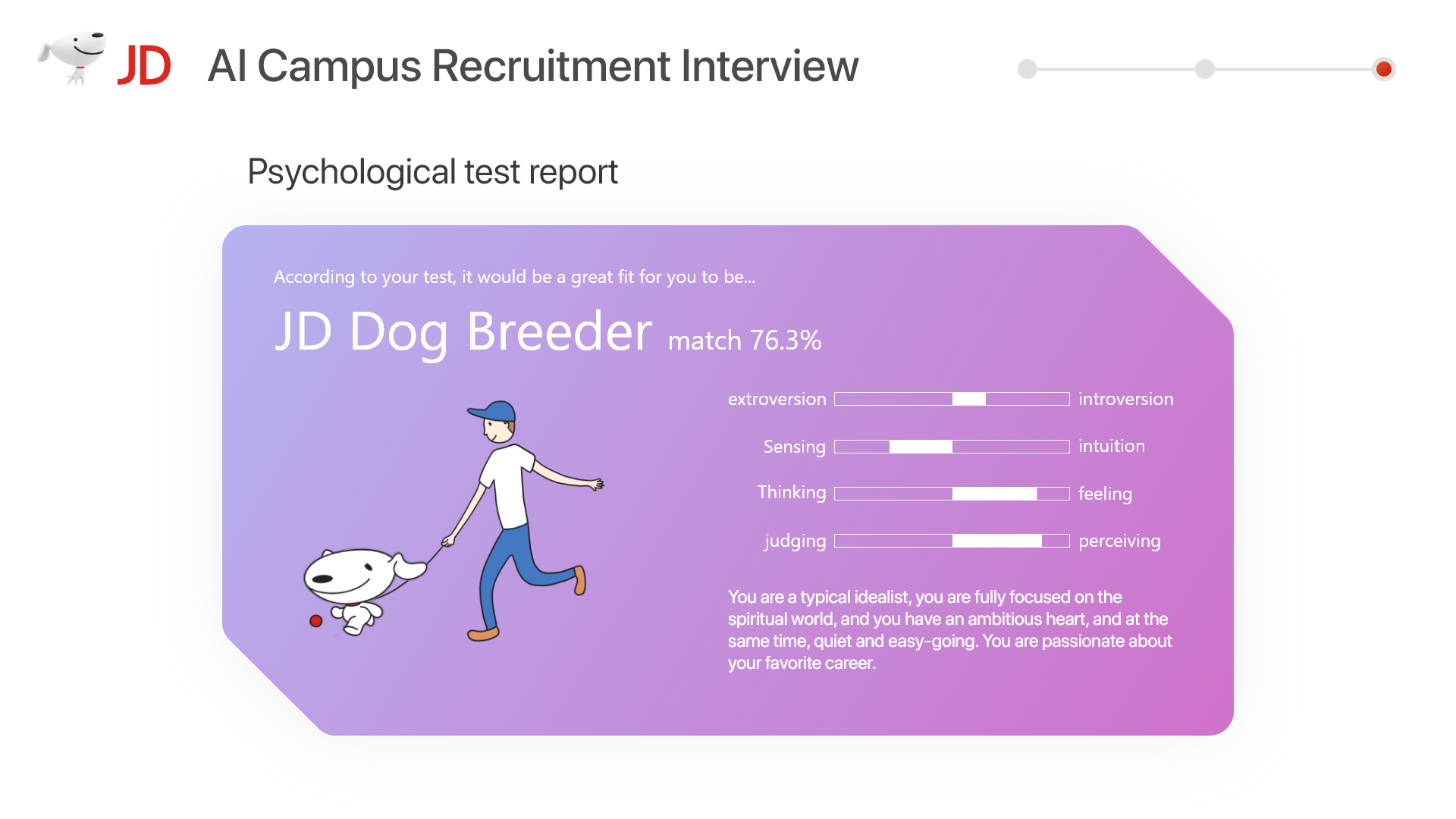 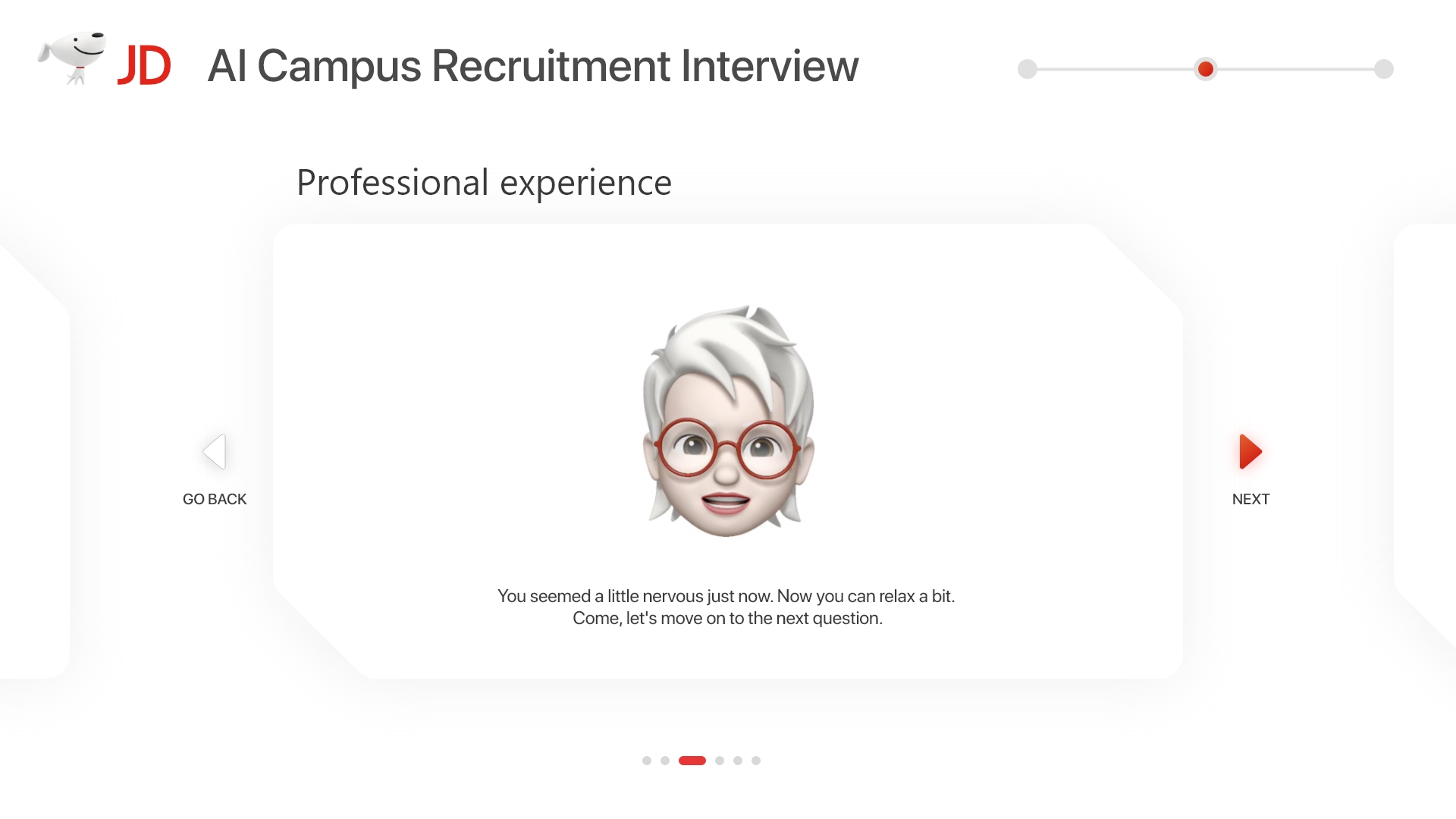 The NLP technology I used was still very basic which mainly analyzes the language by searching the keywords. In such a case, I intentionally lower users' exception by designing a "humble" personality for the AI robot. 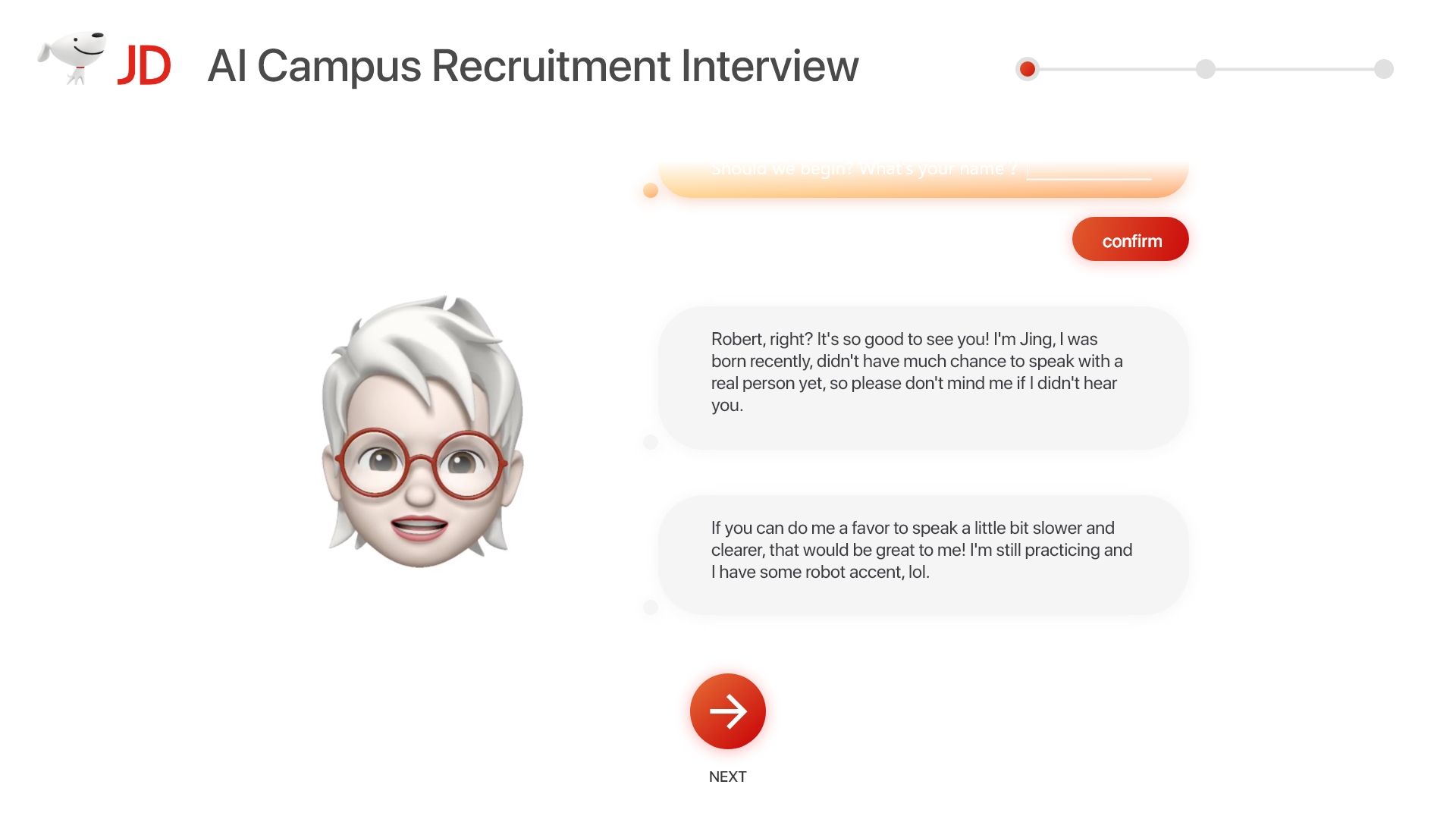 The AI HR robot is designed for campus recruitment events, in which students usually want to learn a lot about the job position and company information and also send their CVs. With this robot, HRs don't need to answer questions especially those been repetitively asked.

Using JD's recycled cardboard, I designed a robot that can be easily assembled and disassembled. 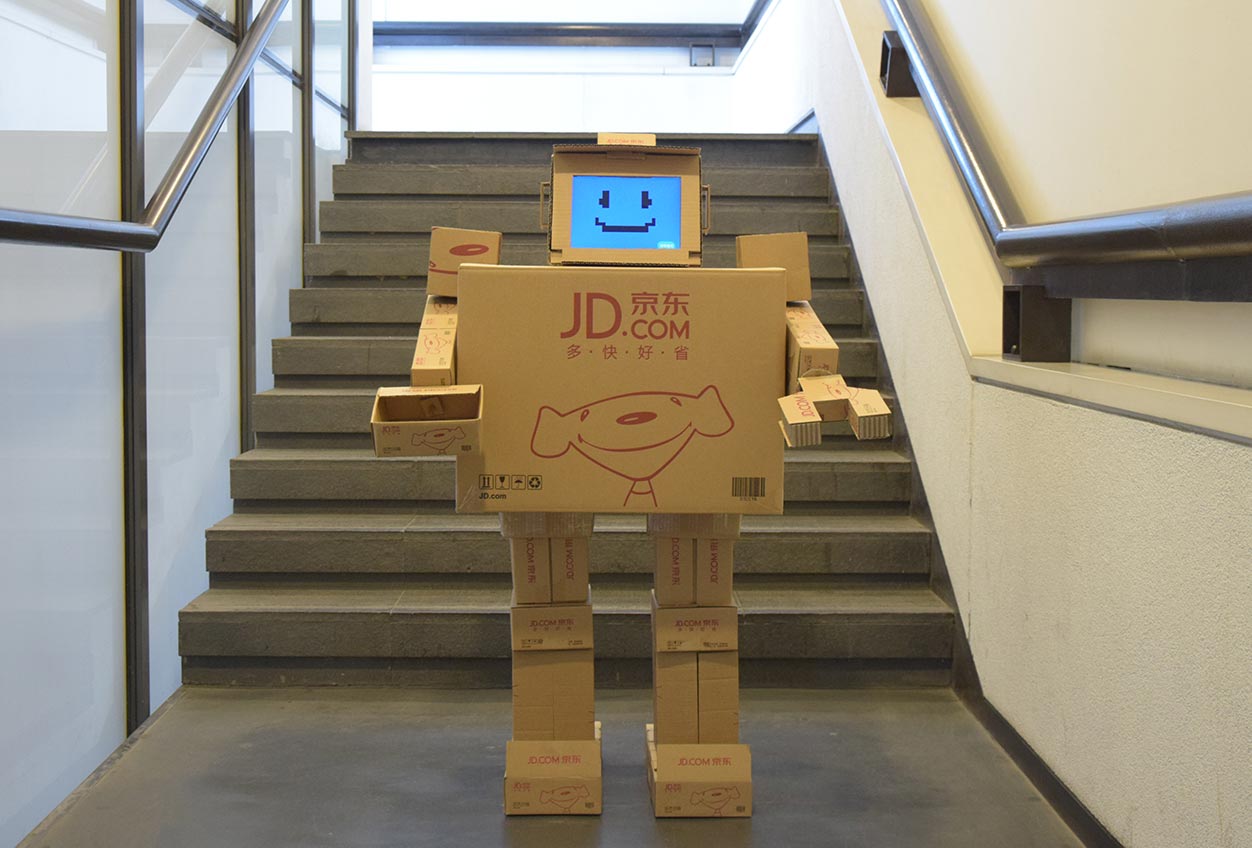 The robot's face has five different states, including confusion, sleepy, smiling, talking, and blinking, and would be displayed depending on the stage of the conversation. (e.g. When the robot doesn't talk to users for some time, the sleepy face would be shown)

Users can chat with the robot not only by talking but also by touching on the screen which is designed as the robot's face and also a user interface through that users can easily review conversation history that is presented as conversation bubbles. 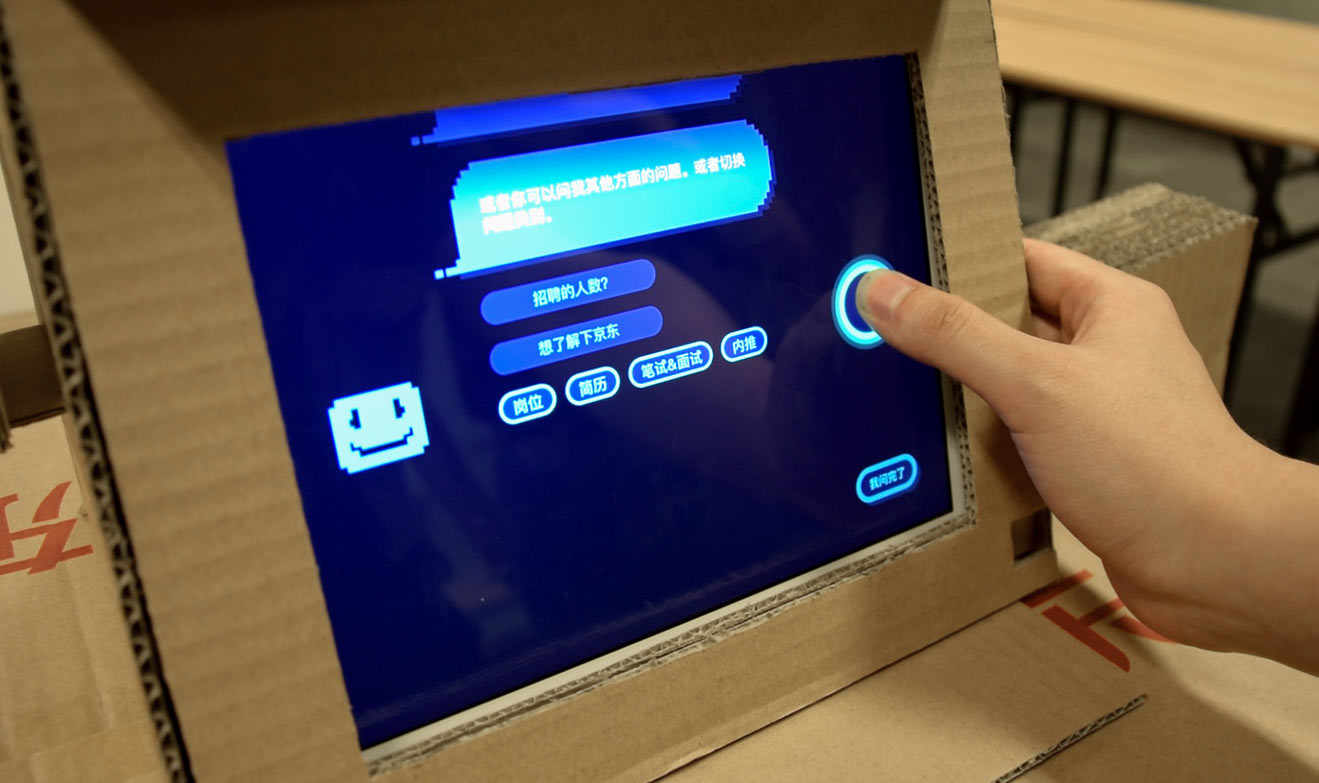 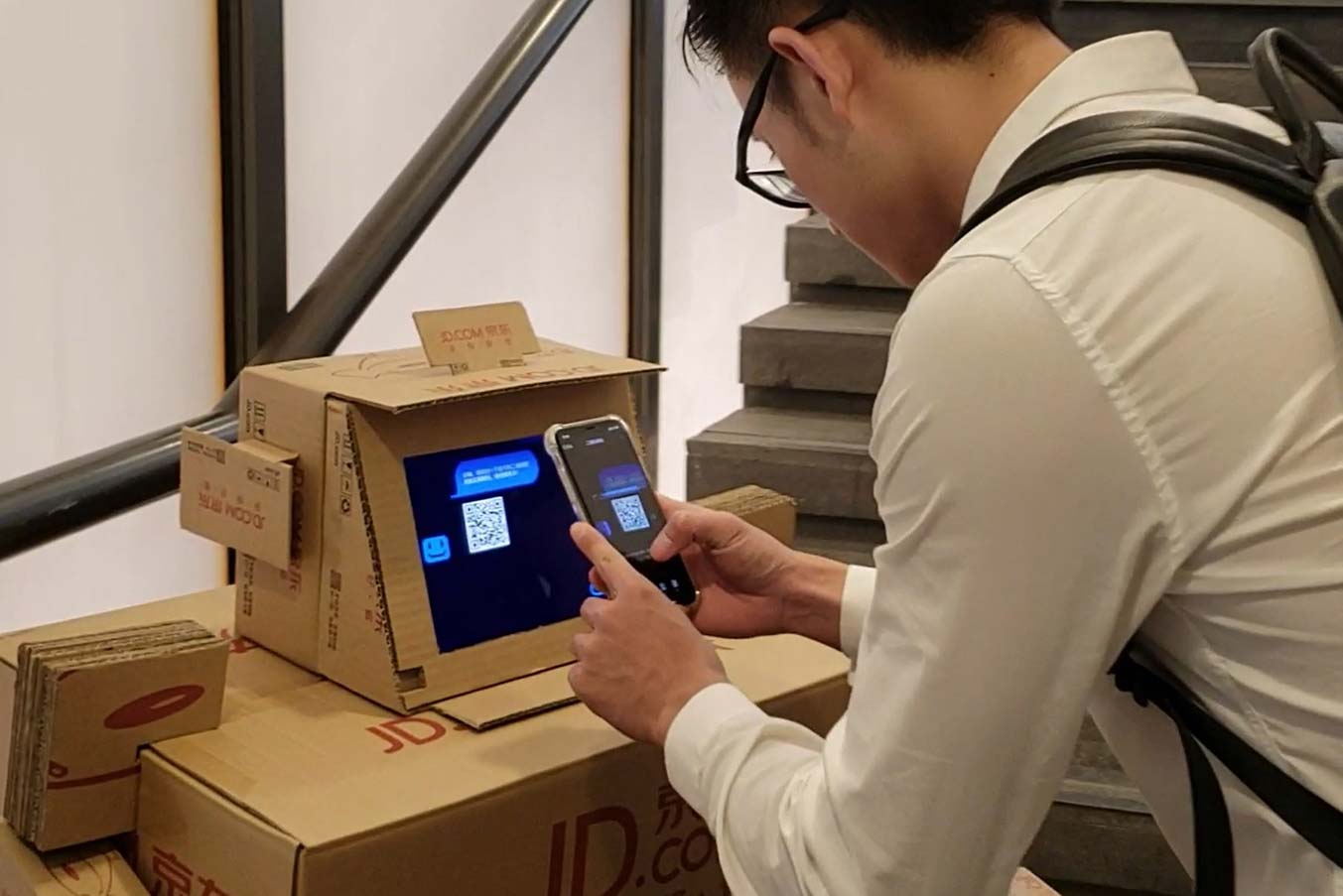 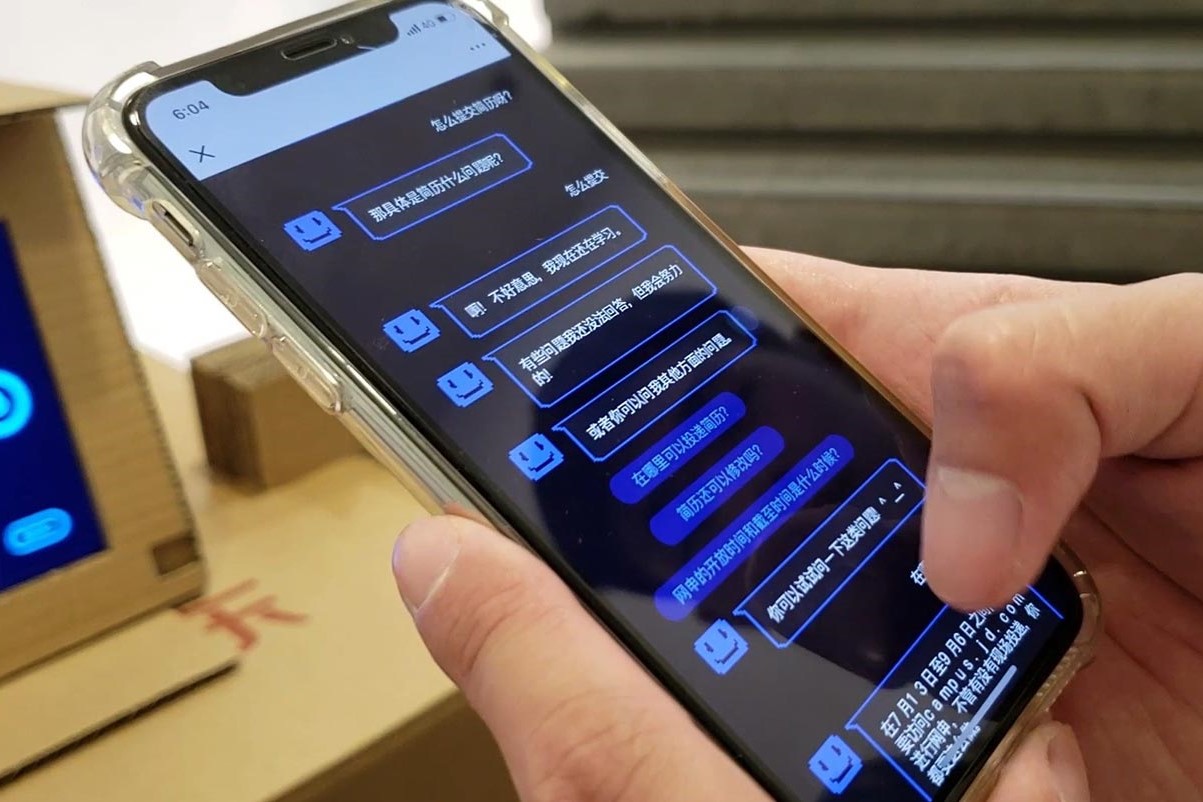 In order to realize an intelligent conversation experience in the case of limited NLP technology, I designed the entire dialogue flow. The functional dialogue mainly includes core, skip, bridge and chatter. 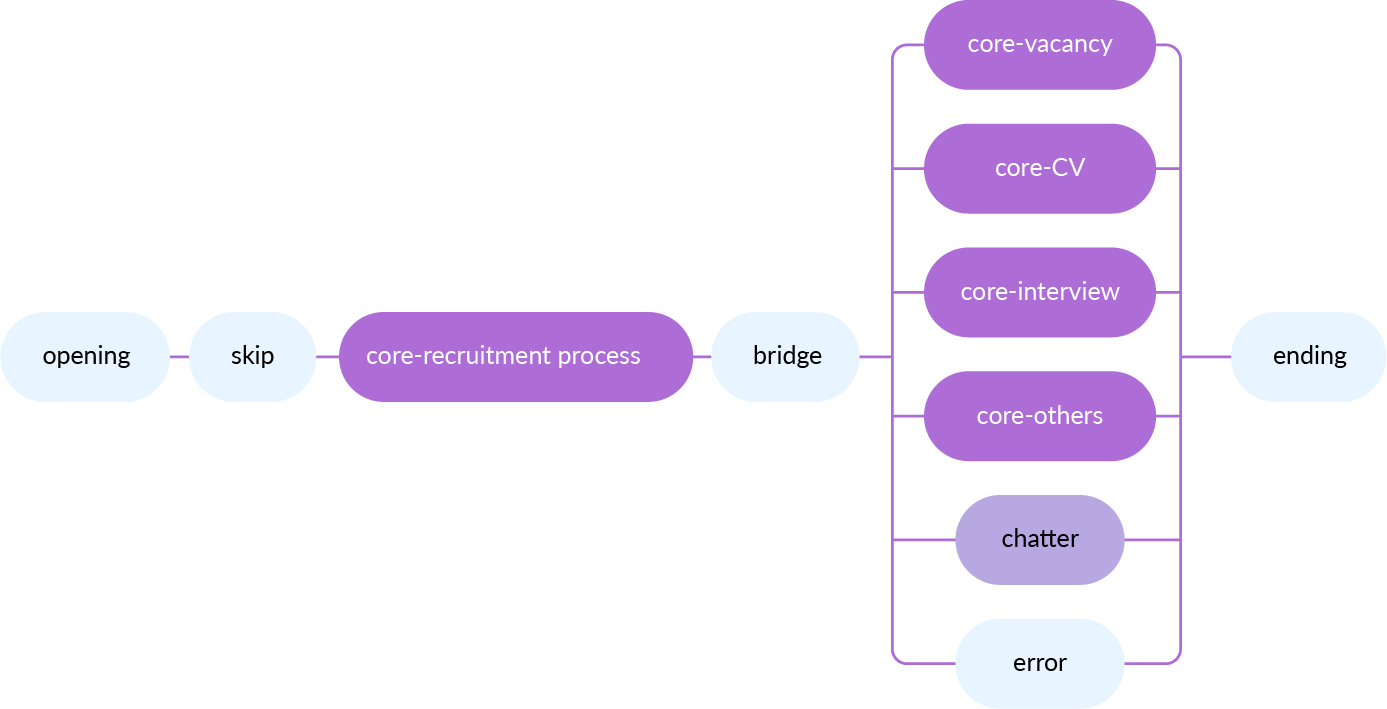 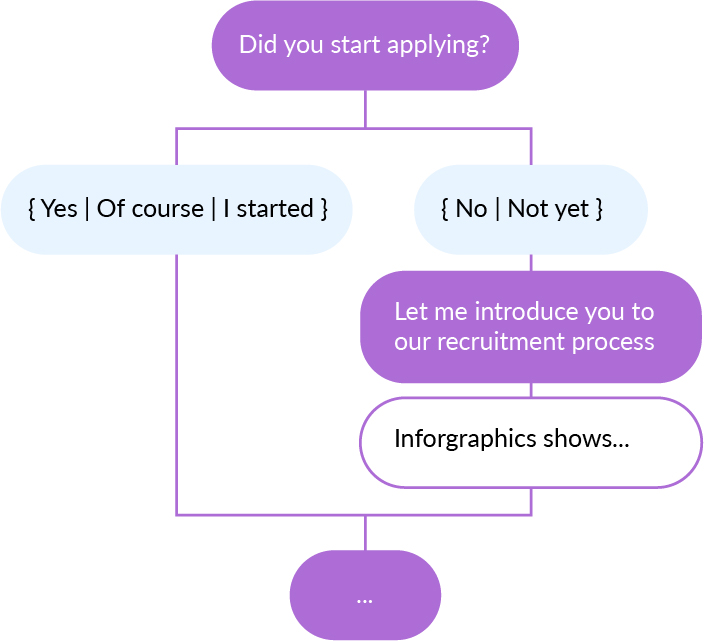 In an effort to make the user interface and robot appearance looks consistent with the overall style of the cardboard, I used a pixelated user interface style. 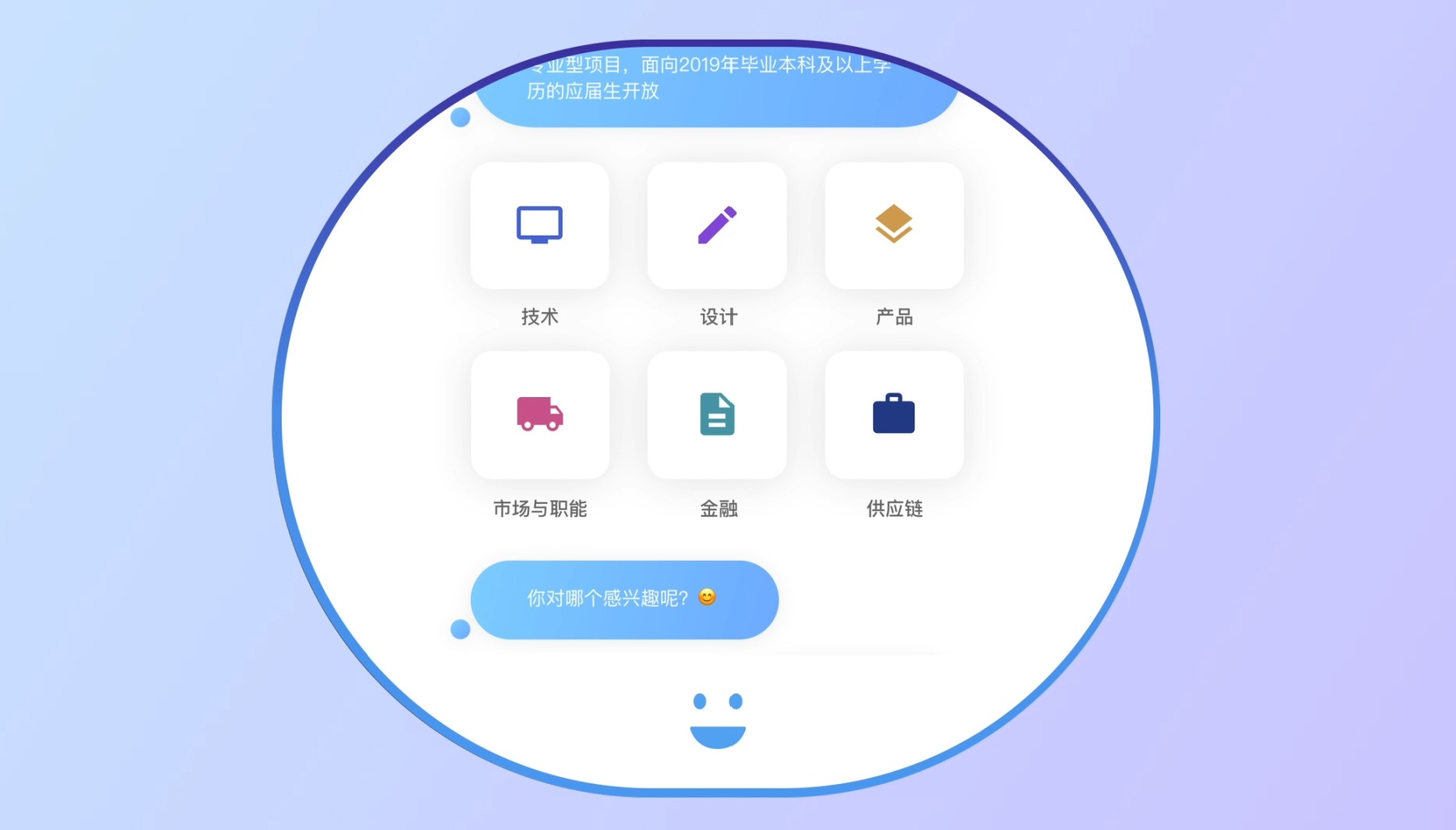 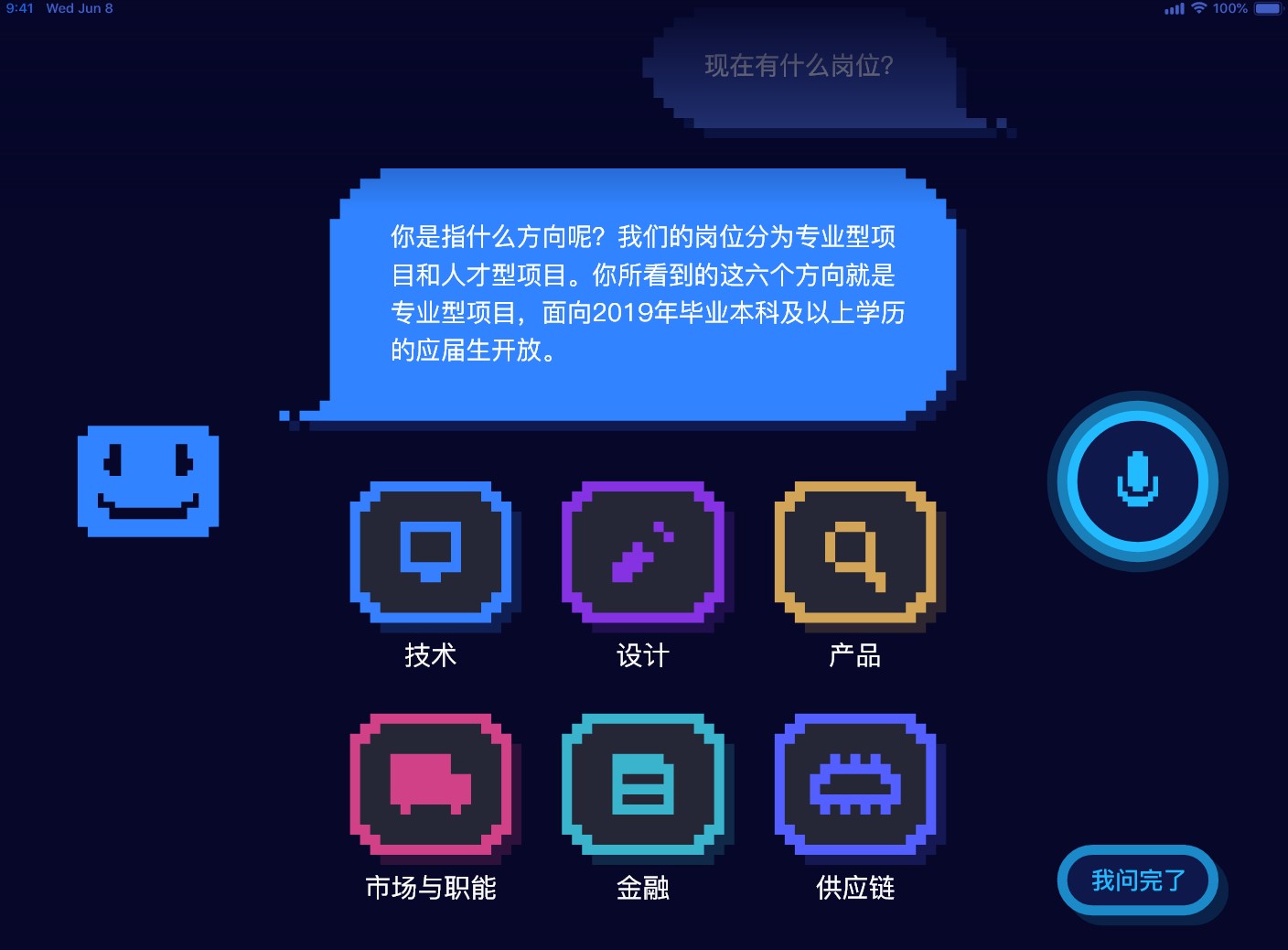